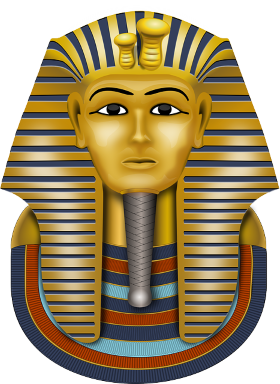 The mask of Tutankhamun

The historical era of ancient Egypt spreads over more than 30 centuries during which different pharaoh’s ruled Egypt. One of the most famous pharaoh, Tutankhamun commonly referred to as King Tut ruled from 1334 to 1325 BC. He was the son of the pharaoh Akhenaten and took the throne at the age of eight or nine!

The discovery, in 1922, of Tutankhamun’s nearly intact tomb received worldwide press coverage and sparked a renewed public interest in Ancient Egypt. Within the tomb, more than 5,000 artefacts were discovered including Tutankhamun’s mask which is nowadays one of the most popular symbol of Ancient Egypt.

While conducting some research on the life of Tutankhamun, two eminent Egyptologists from Cambridge University, UK, decrypted some hieroglyphs which led them to believe that one artefact has yet to be found: A papyrus drawn by King Tut himself! They believed the papyrus has been torn apart into 12 pieces and have managed to identify the exact location of all 12 pieces of the ancient papyrus.

The two Egyptologists contacted a team of archaeologists working on an excavation site near the great Pyramid of Giza and were meant fly to Egypt at the end of the month to join them and excavate the 12 parchments. However, they mysteriously disappeared and never reached Egypt. The police found at their home 12 small papyrus with some mysterious codes as well as a map of the archaeological excavation site. We believe these were written by the two archaeologists to encode the exact locations of all 12 pieces of King Tut’s parchment.

Your task is to use your coding skills to identify the exact location of all the 12 pieces of the ancient parchment.