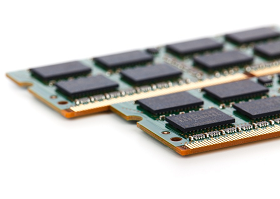 In our previous blog post, “Binary Additions using Logic Gates”, we investigated how logic gates can be used together to create a circuit used in the ALU (Arithmetic & Logic Unit of the CPU) to add two binary numbers together.

Random Access Memory (RAM) is volatile memory that sits next to the CPU. (Volatile means that it is wiped out when the computer is switched off). It is used to store instructions and data currently used by the CPU.

Each data cell consists of a D-Type Flip-Flop circuit that is built using four NAND logic gates connected as follows: 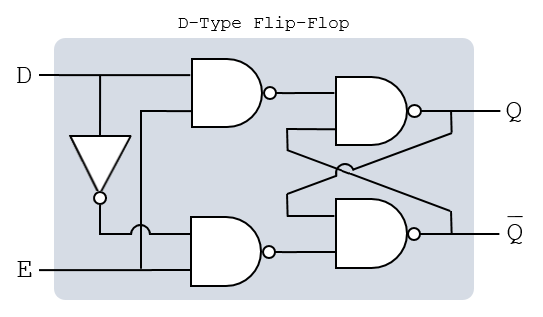 We represent a D-Type Flip-Flop Circuit as follows. You can change the input values D and E by clicking on the corresponding buttons below to see the impact on the outputs Q and Q.


A D-Type Flip-Flop Circuit is used to store 1 bit of information. It has two input pins (Called D (Data) and E (Enabler) and two output pins (Q and Q = NOT Q).

The truth table of a D-Type Flip-Flop circuit is as follows: 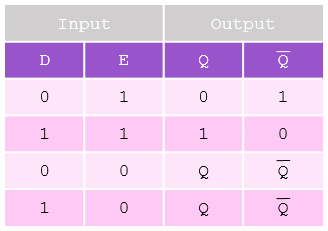 The enabler input E is often connected to another circuit called the clock (e.g. CPU clock). The clock signal constantly and regularly alternate between two states: 0 and 1, similar to a heart beat. Inside the CPU the clock signal controls the execution of the FDE cycle.

The Clock Signal is similar to a heart beat.

In other words, the change of input (D) is not applied immediately (to the output Q) but is applied at the next “tick of the clock”. There are many applications to this delay such as the ability to create a frequency divider. (divide the clock frequency by a multiple of 2).