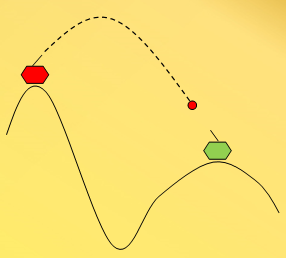 Most artillery games are based on the Projectile Motion Formula used to trace the trajectory of a projectile thrown in the air. Due to gravity, its trajectory will be a parabola which shape will vary based on the angle and initial velocity of the projectile.

Use the script below and see what happens when you change the angle. (e.g. use a value between 0 and 90 degrees) or the velocity.

This page helped us with defining the equation for the trajectory of the projectile:
https://en.wikipedia.org/wiki/Projectile_motion

Using the displacement formula we can calculate the position ((x,y) coordinates) of a projectile at any given time.

Let’s apply these formula using a Python script using the processing library to create a frame based animation.

Angry Birds, Tanks, Worms, Sports/Ball based games (Basketball…) all use a similar algorithm and formula. Can you think of any other video games based on this formula?