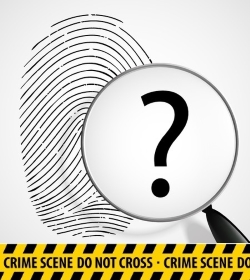 Doctor Black has just been found dead in his bedroom. He has been knocked down by a heavy metallic object, most likely the candlestick that was found on the floor next to Doctor Black. When falling down, Doctor Black broke his watch which stopped at 8:14 PM. We can assume that this is the time of death.

Doctor Black’s bedroom is the master bedroom and is located on the first floor.

Our crime scene investigator took some notes to recap the key facts: 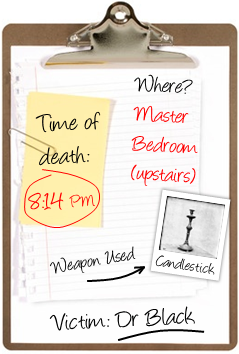 At this time of the day there were only four guests in Doctor Black’s mansion. They are the prime suspects:

Our crime scene investigator interviewed all four suspects and gathered some facts about their whereabouts around the time of death.

He has decided to create an algorithm based on these facts to help him solve this murder mystery. To do so he has translated each fact into pseudo code as follows:

Below is our crime scene investigator’s full algorithm:

Will it help you solve this crime?

And the murderer is …