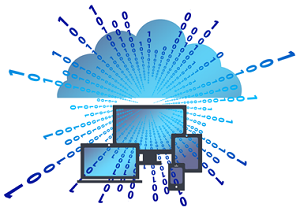 Digital data consists of binary information and is stored as a collection of 0’s and 1’s. On a computer system, numbers, text, pictures, sound files, video clips and computer programs are all stored using binary code.

Text files are stored using a character set such as ASCII code or UNICODE. The number of bits used to encode one character has an impact on the total number of characters included in the character set.
For instance:

Based on this information, we can easily work out the formula used to estimate the size of a text file as follows:

A bitmap picture is a 2D grid of pixels of different colours. You can read more about how bitmap pictures are stored in binary on this post.

Two criteria will impact the file size of a bitmap picture:

Based on this information, we can easily work out the formula used to estimate the size of a bitmap picture as follows:

Note that a bitmap picture would also include a few more Bytes of data to store the Meta Data which contain additional information used by the computer to render the graphic such as the width of the graphic in pixels, its height in pixels and its colour depth. We will however ignore this in our file size estimation as for large graphics this would only make a small difference to the file size estimation.

An analogue sound wave can be digitalised using a process called sound sampling. You can find out more about sound sampling on this post.

Three criteria will impact the file size of a sound file:

Based on this information, we can easily work out the formula used to estimate the size of a sound file as follows:

Also, similar to picture files, a sound file would also include some meta-data (sample rate, bit depth, number of channels) needed for the computer to interpret the data, however we will once again ignore this data in our file size estimation.

Your task is to write three procedures used to estimate the file size of text files, bitmap pictures and sound files as follows:

Note that for all three procedures, the output information should be displayed using the most suitable unit (bits, Bytes, KB, MB or GB)

Complete your code below:

All done? It’s now time to test your code to see if it works as expected.

Note that this test plan gives you two possible outputs for each test depending on whether your calculations are based on 1KB = 1,000 Bytes or 1KB=1,024 Bytes. Both approaches are acceptable.

Animated Gif files consists of a collection of bitmap pictures that are displayed one at a time over a few seconds. Most animated gif files loop back to the first picture (frame) after reaching the last frame. The frame rate of a gif file defines the number of frames per second.

We can calculate the size of an animated gif files as follows:

Your task is to create an extra function called estimateAnimatedGifFileSize() that will take five parameters, the width and height of the pictures in pixels, their colour depth, the frame rate in fps (frame per seconds) and the duration of the animation in seconds. It will output the estimated file size using the above formula.

You can then test your subroutine using the following input data:

Movie files are similar to animated gif. A movie clip also consists of a collection of still pictures displayed with a high frame rate e.g. 24 fps (frames per seconds). Movie clips also include a soundtrack that also need to be included in the estimation of the overall file size of a movie clip.

You can then test your subroutine using the following input data:

Note that these calculations are based on estimating file size of uncompressed files. Compression algorithms are often applied to picture files, sound files and movie files to reduce their overall file size.

For instance .png or .jpg picture files, .mp3 sound files or .mp4 movie files are all compressed files so their file size would be smaller than the file size given by the above calculations.