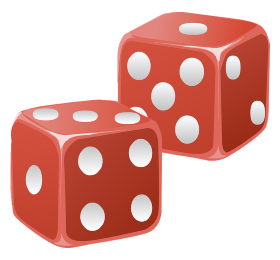 In this challenge we will use a Python algorithm to perform a frequency analysis of the score obtained when throwing a set of two dice.

When using single dice, the score of the dice can be any of the 6 values/sides (1 to 6). Each value has an equal probability of 1/6.

The dice experiment can be simulated using a computer algorithm to simulate throwing a dice a 1,000 times and keeping a record of the number of times each of the 6 values appeared. We can then calculate the frequency of each value as a percentage. In theory, each value should have a very similar frequency of around 16.67% (matching the 1/6 probability).

When completing such an experiment in real life, we would mot likely use a tally chart to record the number of occurrences for each of the 6 possible values. 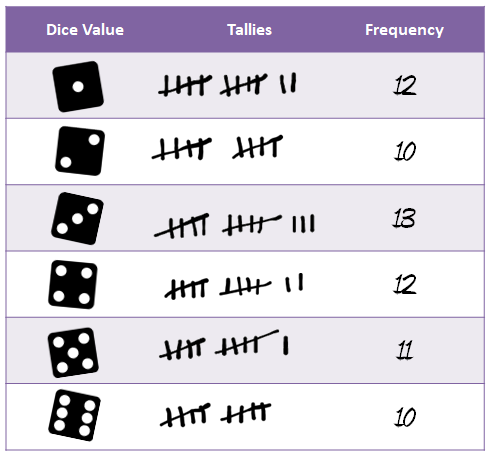 To record our “tallies” in a Python program we will use a dictionary with 6 keys (the 6 values of a dice, from 1 to 6) and for each key, the associated value will be the number of occurrences of when the value appeared.

Here is the Python implementation of our dice experiment (frequency analysis).

Run the above code several times.

We are now going to simulate the same experiment, this time using two dice, and recording the total score (by adding the value of both dice). The dice score will be as follows:

Your task consists of adapting the Python program given above (1 dice experiment) to implement the experiment with two dice and see whether your program produces the expected probabilities for all possible scores from 1 to 12.