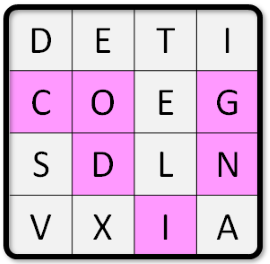 Boggle is a word game based on a 4×4 grid of 16 letters. Each time the game is played a new grid is generated. In the real game this is done by shaking a cube that contains 16 letter dice. The The aim of the game is to find words that can be constructed from sequentially adjacent letters from the 4×4 grid. “Adjacent” letters are those horizontally, vertically, and diagonally neighbouring. Words must be at least three letters long, may include singular and plural (or other derived forms) separately, but may not use the same letter from the grid more than once per word.

For this challenge you will re-create a single-player game of Boggle using a step by step approach.

Your first task is to write a script that will randomly generated a 4×4 grid containing 16 letters randomly picked from the alphabet.

A 4×4 grid could be defined as a 2D array (a list of lists in Python). For instance, the following code uses two nested for loops to generate a 2D array filled with 16 letters “A”.

Your task is to adapt the above code to fill the grid with random letters rather than just using letter “A”.

Then you will need to complete the code to display the content of the grid using the right format: the output should look like a 4×4 grid. (Tip: you will need to use nested loops once more time!)

The next step is to let the user input a word that they spotted on the grid.
You will need your program to decide if the word is a valid word that can be generated using adjacent letters from the grid. (and making sure the same letter cannot be used mote than once).

Finally you may let the user enter several words, and calculate a total score by adding the length of all valid words that the user will spot (making sure they do not enter the same word more than once).