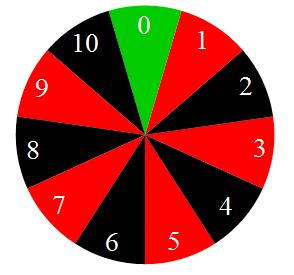 Rules of the Game

A player starts the game with 10 chips.

For each game the player should be asked how many chips they want to bet. They should not be allowed to bet more chips than they actually own.

The user should be asked which colour they want to bet on:

The computer program should then “spin the wheel” by generating a random number between 0 and 10.

At the end of each bet, the program should display the user’s total number of chips.

The player should be able to carry on playing for as long as they want unless they have lost all their chips. In this case the game should end.

Complete the code below to finish this game: