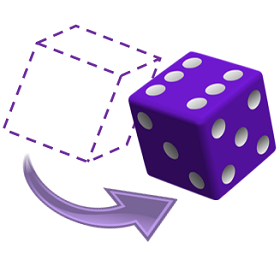 In this blog post we will investigate how to create some basic classes and objects that could be used in a range of programming projects.

A class consists of a collection of states (a.k.a. attributes or properties) and behaviours (a.k.a. methods).

An object is an instance of a class. The attributes of an object as stored using variables for storing data and the behaviour/methods of an object are implemented as functions or procedures and can be used to perform operations on the data.

Most classes have one method called a constructor. It is a function that is automatically called when an object is created/instantiated from a class. It is mainly used to initialise the default values for each attribute/variable of the object. In Python the constructor of a class is the __init__() function.

Dice ClassPadlock ClassDeck of cardsCoin Class
Our first class will be used to create basic game of dice. The Dice class will have two properties: numberOfSides and value and one method throw() that will update the dice value by generating a random number between 1 and numberOfSides (e.g. between 1 and 6 for a standard 6-side dice).

Our second class is used to create a padlock with a four digit key. The Padlock class has an unlock() method used to test a combination to try to unlock the padlock.

The key of the padlock is stored in a private property: __key (In Python the “__” prefix is used to indicate a private property or method.) The key can still be accessed from outside the class using the two public methods getKey() and setKey(). This is an example of encapsulation.

To create a deck of cards we will create two classes as follows: 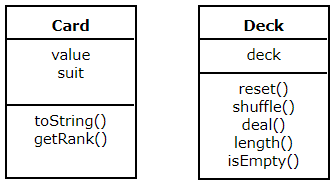 In order to create a game of Head or Tail we will create a Coin Class using two properties: faceUp (which will be either Head or Tail) and value of the coin (in pence) and one method to flip the coin.

Use the two classes Card and Deck (see above) to implement the card game “War” between two players using the following rules: