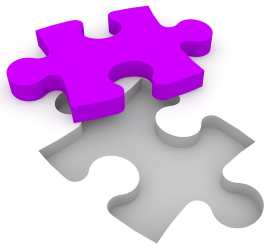 Object-Oriented Programming (OOP) is a programming approach based on objects and classes. The object-oriented paradigm allows us to organise software as a collection of objects that consist of both data/attributes and behaviours.

Object-Oriented Programming makes it easier to design and structure code because:

OOP Programming is based around the following key concepts:

A class consists of a collection of states (a.k.a. attributes or properties) and behaviours (a.k.a. methods).

An object is an instance of a class. The attributes of an object as stored using variables for storing data and the behaviour/methods of an object are implemented as functions or procedures and can be used to perform operations on the data.

Most classes have one method called a constructor. It is a function that is automatically called when an object is created/instantiated from a class. It is mainly used to initialise the default values for each attribute/variable of the object.

Let’s consider a class class called Superhero.
The attributes of a superhero are:

Some of the methods of a superhero are:

The diagram on the right represents the Superhero Class with its attributes and its methods. Note that we do not need to represent the constructor on this diagram as it is assumed that all classes have a constructor. (In Python the constructor of a class is the __init__() function.)

Instantiating Objects from the Superhero Class

Our video game will have 3 superheroes called Spiderman, Superman and Batman. We will hence instantiate 3 objects from our Superhero Class.

It is possible to organise classes into master classes and sub classes by creating a relationship between classes called inheritance. This provides a way of categorising classes and provides an efficient way to organise the code of a complex program more effectively.

For instance, let’s consider an online shop that sells different types of products (items) such as DVDs, Books, and Mp3s. 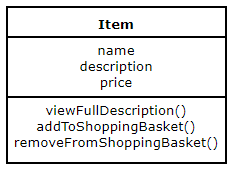 The code of such an online shop could be based around the use of a class called Item. This class would contain all the attributes and methods that each item will need:

Sub-classes can then be defined with additional attributes and methods which are more specific. For instance:

The MP3, DVD and Book sub-classes will inherit the properties and methods of the parent class (Item) as represented in green below.

The inherited properties and methods of a sub class do not need to be duplicated in a class diagram, as it is understood that they are inherited from the parent class: 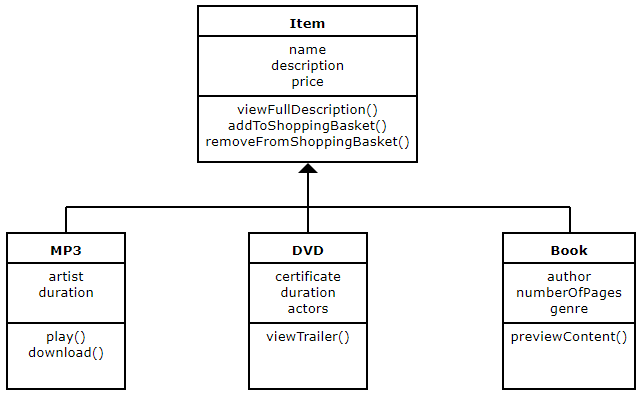 For example we could have a class representing hybrid cars, that would inherit the properties and method of both electric cars and petrol cars. 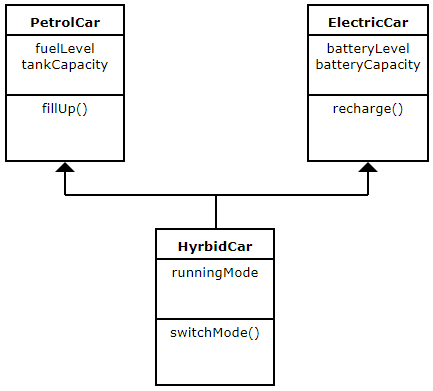 When defining attributes and methods of a class, these can be defined as being either private or public.

A public attribute or a public method can be accessed from anywhere (other methods of the class or from outside the class).

For instance, let’s consider a Car class with the following attributes and methods:

In our car racing game, we would instantiate an object called playerCar from this Car class.

If all methods and properties are declared as public, then we would be able to access them from anywhere in the code. e.g.

However, it is considered good practice to “hide” some properties or methods from the “outside world” by making these private. In this case these private properties and methods cannot be accessed from outside the class.

For instance, in the example above, we may decide that both attributes speed and fuelLevel should be set at private. In this case none of the following three lines would compile and hence these would have to be removed:

We could still alter the content of the fuelLevel and the speed of the car in the code of the fillUp(), accelerate(), slowDown() and drive() methods of the car.

For instance, to retrieve the fuelLevel of the player car we could have a new public method called getFuelLevel() and use it to inform the user of how much petrol they have left in their tank.

We may also define a setter for this property in case we want to give an option for the player to reset their tank to a specific value or to empty it. e.g.

Note that using setters is also useful to prevent direct access to a property and implement validation checks within the setter methods.

For instance if the fuelLevel was a public property then the following code would be accepted even though a car cannot have 999 litres of petrol (999 > tankCapacity)!

By making the fuelLevel property private and forcing the use of a setFuelLevel() public method (setter), we can implement in the code of the setFuelLevel() method a validatiom check that cannot be bypassed to ensure that the parameter given is a positive number, lower or equal to the tankCapacity. e.g.

The setter could then be used in our code as follows:

Let’s consider the following class diagram, where both the ElectricCar class and the PetrolCar class inherits from the Car class. 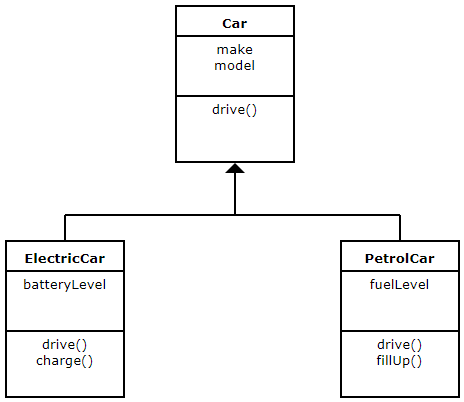 In this class, both the PetrolCar and the ElectricCar classes inherit the drive() method from the parent Car class. However this method will have to be implemented differently as you do not dive an electric car the same way you drive a petrol car. The code used in both methods will be different and overwrite the code of the parent class. This is what over-ride polymorphism means: when a method from a subclass has to be overwritten to override the method inherited form the parent class.

On occasions, as this is the case in our example, the drive() method of the Car class is only defined but not implemented at all (an empty function, without code) in the Car class. It will be overwritten and properly implemented in the sub classes instead.

Overloading Polymorphism is used when a method can be implemented more than once to accept different parameters.

For instance, let’s consider our Superhero class to which we would like to add a method to set the Date of Birth (DoB) of a superhero. We could write this same method several times to accept different parameters such as:

The method could accept a date parameter as a string in the “DD/MM/YYYY” format.

The same method can be implemented a second time, taking three parameters as follows:

Having multiple implementations of the same method to accept different parameters (different number of parameters or parameter of different data types) is called over-loading polymorphism.

So to sum up, an abstract class:

When designing a program based on procedural programming, we can use four main tools:

These tools are still very relevant when designing OOP programs. However additional tools can be used to identify the various classes/objects needed, their attributes and behaviours, the relationships between classes (inheritance) and how the various objects will interact with each other. One of the most widely used tool is UML, a standard used to draw a range of diagrams to visualise and design a system based on an OOP approach.

Click on the following banner to learn more about UML: