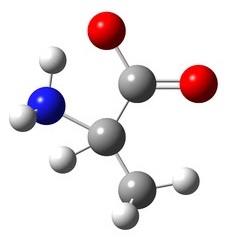 In this challenge you will improve your string manipulation techniques as well as use Python to perform some basic mathematical calculations.

For example, water has the molecular formula H2O, indicating that there are two atoms of hydrogen and one atom of oxygen in a molecule of water.

In the following script we use a Python dictionary called atomicMass to store the atomic mass of some of the main atoms (C, H, O…)

We then work out the molecular mass of water: H20.

Adapt this script to get the program ask the end-user to enter a molecular formula of their choice.
Using string manipulation techniques your Python script will break down the formula entered by the end-user and calculate the total mass of the molecule.

Test your script with the following molecules:

Add more atoms to the atomMass dictionary as follows:

Adapt your script so that it recognises when these atoms are used by the end-user when entering their molecular formula. This will be based on the use of uppercase & lowercase letters.

Test your script with the following molecules: