The idea is to use the BBC micro:bit in the classroom to conduct a survey by asking a yes/no question such as:

Then you will pass the micro:bit around so that each pupil can vote using the A and B buttons of the microbit:

After each vote the BBC micro:bit will display a tick for two seconds to confirm the vote. 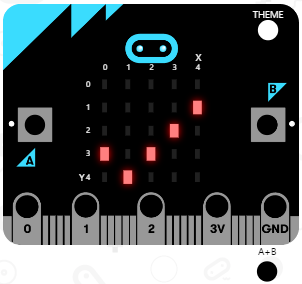 To finish the vote the user will press both A and B buttons at the same time. In this case the BBC micro:bit will display how many A votes have been recorded (variable voteA), how many B votes have been recorded (variable voteB) and then use an If Statement to decide if option A (Yes) Or B (No) wins. To do so it will use comparison operators such as > or <. (if voteA > voteB then A wins)

Let’s initialise our voteA and voteB variables that will be used to count how many tumes the A nad B buttons have been pressed. 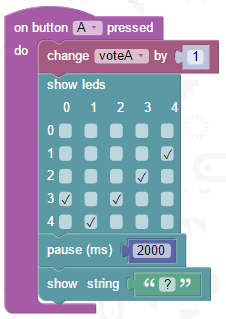 We then display a question mark to inform the user the BBC micro:bit is ready to accept another vote.
Step 3: When button A is pressed
Very similar to the previous code, this time to record the B vote. 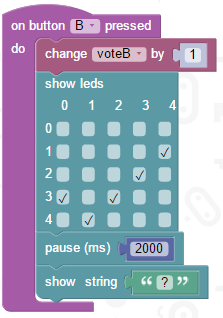 Step 4: When A+B are pressed simultaneously
The user pressed both A and B at the same time to end the vote. In this case the BBC micro:bit will display how many A votes were recorded, how many B votes were recorded and decide if A or B wins or if it is a draw. 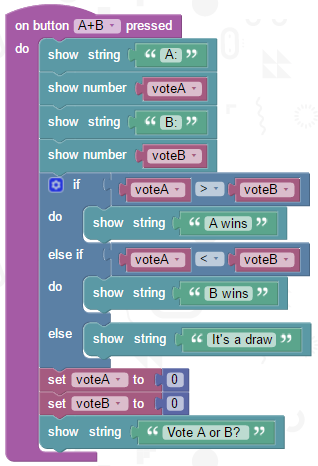 Complete and Test your Voting System

Complete the system using the code provided above.

Test the game using the online emulator. Then when you are confident if fully works, download your code to the BBC micro:bit and conduct your first survey with your classmates. Make sure you ask for a question with only two possible answers (e.g. Yes/No question).