Posted on May 17, 2018 by Administrator Posted in Computer Science, Python - Advanced, Python Challenges 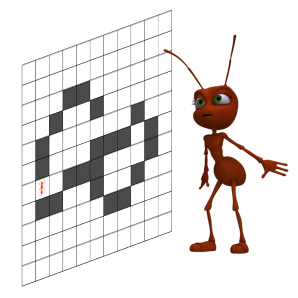 Langton’s Ant is a cellular automaton that models an ant moving on a grid of cells following some very basic rules.

At the start of the simulation, the ant is randomly positioned on a 2D-grid of white cells. The ant is also given a direction (either facing up, down, left or right).

The ant then moves according to the colour of the cell it is currently sitting in, with the following rules:

These simple rules lead to complex behaviours. Three distinct modes of behaviour are apparent, when starting on a completely white grid:

Below is our implementation of Langton’s Ant model using Python Turtle. Note that, on a fixed-size 2D grid, we have had to add one rule to the model:

You can complete this code by adding multiple ants to this model or by starting with a random grid of black and white cells instead of an an empty grid of white cells only.

A more complex extension to this challenge is to add multiple colours to the model (not just black and white cells). See examples on this page.