The Heron’s formula is a famous formula used to calculate the area of a triangle based on the length of its three sides. It is called “Heron’s Formula” (sometimes called Hero’s formula) after Hero of Alexandria who was a Greek Engineer and Mathematician in 10 – 70 AD.

Your task is to write a function called calculateTriangleArea(). Your function will:

You will also then need to create a small program that will:

Once your code is done, complete the following tests to check it is working as expected:

Create a menu system, where the user is asked what shapes they would like to calculate the area of before being asked to enter the relevant dimensions. 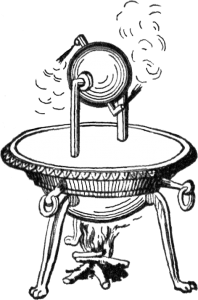 Hero published a well-recognized description of a steam-powered device called an aeolipile (sometimes called a “Hero engine”). Among his most famous inventions was a windwheel, constituting the earliest instance of wind harnessing on land.