This challenge is based on this Frog puzzle board game.

At the start of the game several green frogs and one red frog are positioned on the board/pond on different waterlilies based on a given configuration. (The game comes with a set of cards, each card describing one different configuration / puzzle to solve).

Here is an example of initial configuration: 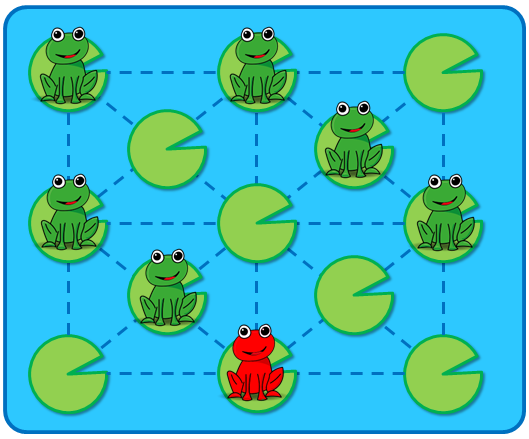 The aim of this game is to remove all the green frogs from the board/pond so that only the red frog remains on the board. A frog is removed from the board when it falls off its waterlily. This happens when another frog hops above its head: 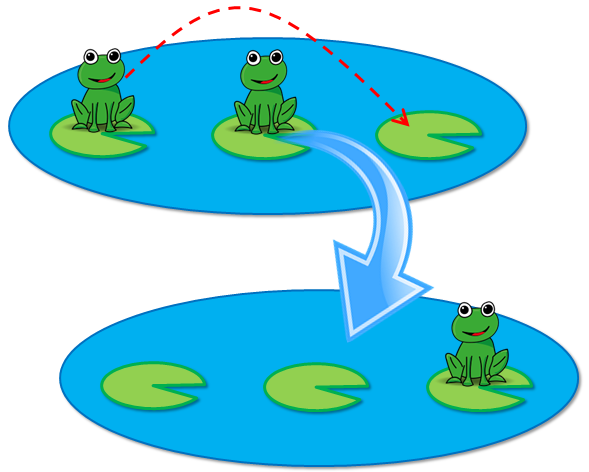 When a frog is on a waterlily, it can jump over adjacent waterlilies only when:

The aim of this programming challenge was to design and implement an algorithm to search for a solution to this puzzle using a trial-and-error approach. This can be done in Python using a backtracking algorithm which will identify the possible moves on the board, and try these moves until it either finds a solution (only one red frog remains on the board) or reaches a dead end (when several frogs are left on the board but can no longer jump around). If after moving frogs around a dead end, is met, the algorithm will backtrack to previous moves to try alternative possible moves.

The possible moves a frog can do depend on its position on the board as well as the position of other frogs. For instance, here are two different diagrams to show potential moves of a frog placed on the top-left waterlily (0) or on the central waterlily (6):

By investigating all the possible moves from each waterlily we can construct a weighted graph where:

This approach results in the following weighted graph: 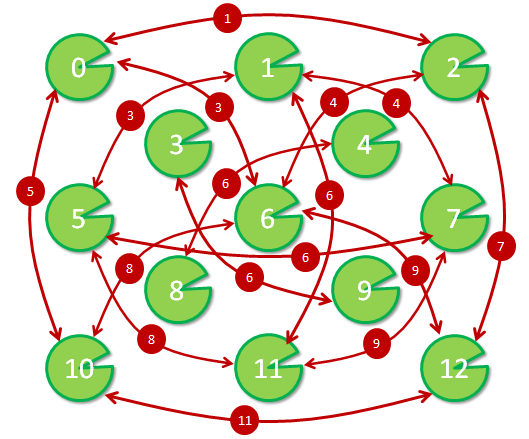 In Python, a graph can be stored as a dictionary of lists. Each key of the dictionary represents a node, the value associated to each key is a list of edges. Each edge will contain a sub-list of two values: the node/waterlily being reached and the waterlily being jumped over (the weight of the edge).

Here is how the above graph is implemented in Python:

You can investigate here the full Python code used to implement our backtracking algorithm using a recursve function called jumpAround().