The Fahrenheit scale is used mainly in the USA whereas other countries tend to use the Celsius scale.

It is possible to convert a temperature from Celsius degrees to Fahrenheit and vice-versa using the following conversion formulas: 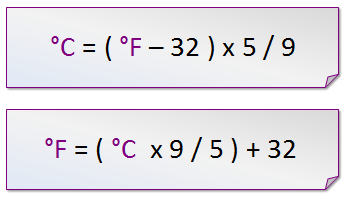 Write a Python script to:

You can now use your code to complete the following test plan to test your code:

On the temperature scale, the 0°C (=32°F is called Freezing Point which is when water starts freezing and becomes ice. At 100°C (=212°F) water starts to boil. This is called Boiling Point.

Adapt your script to write a message to the end user as follows: