The number e is a famous irrational number called Euler’s number after Leonhard Euler a Swiss Mathematician (1707 – 1783). Number e is considered to be one of the most important numbers in mathematics.

In this challenge we will use a Python script to calculate an approximation of e using three different approaches. The first approach as described above as already been implemented in the above Python trinket.

Euler’s number, e, can also be calculated as the sum of the infinite series:

A less common approach to calculate number e is to use a continued fraction based on the following sequence: 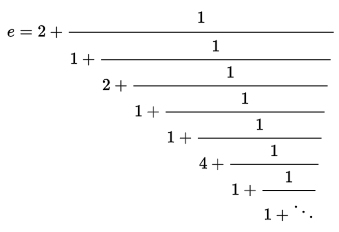 Complete your Python script to implement this continued fraction. (Method 3)