Your task will then to design the network diagram for your school or organisation.

A LAN (Local Area Network) is a network located on one site, where all the computers are geographically close to each others.

A WAN (Wide Area Network) is a network that is spread across multiple sites sometimes geographically remote to one another. A WAN consists of several LANs connected together, often using third party equipment and cables. (e.g. BT lines in the UK or AT&T lines in the US)

The Internet is an example of WAN (the largest of all WANs!).

A router is needed to connect a LAN to a WAN (or to the Internet).

A network topology defines the layout of a network. It describes how different components/nodes of a network are connected together. One of the most frequent topology used in a LAN is the star topology where all computers and other devices are all connected to a central node: either a hub or a switch. 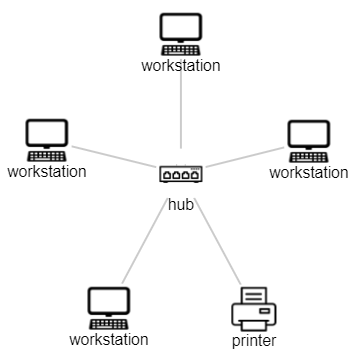 Both a hub or a switch have the same purposes: to connect multiple computers or devices in a star topology. A hub is not as efficient as a switch and would often have less ethernet ports (e.g. typically 4 or 8 ports) 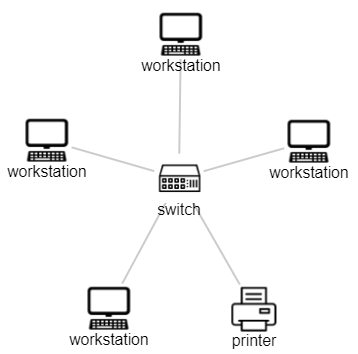 A switch being more efficient than a hub could have a larger number of devices connected (e.g. up to 28 Ethernet ports).

To build a larger network, it is possible to combine multiple star networks using a central switch. This create a “switch-star” topology: 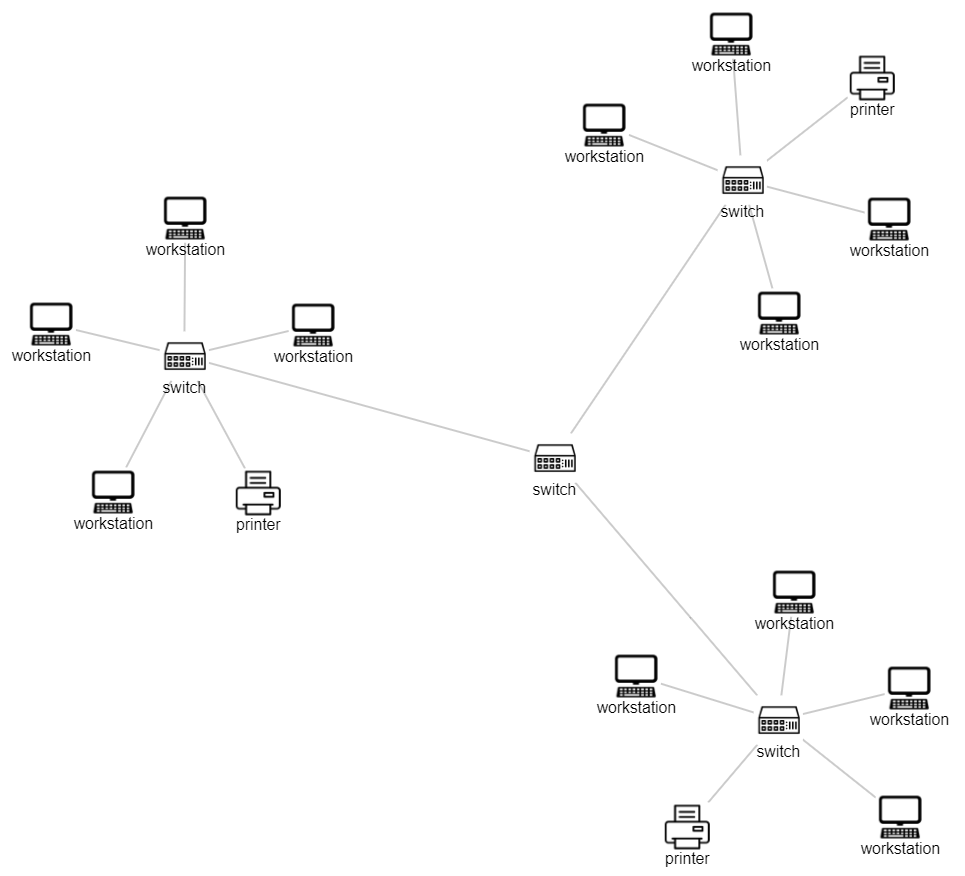 Note that there are other types of topologies which are not based on the star topology. (e.g. bus topology, ring topology, full and partial mesh topologies). 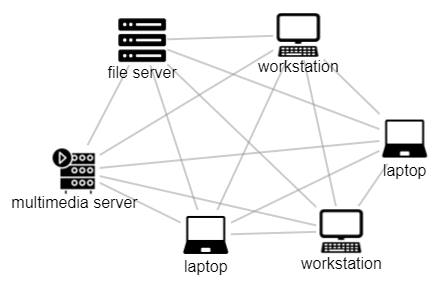 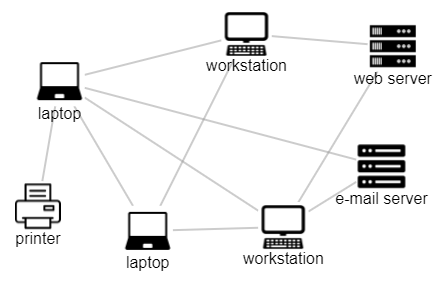 However, for now, we will focus on star based topologies as these are the most frequently used topologies to build a LAN for a school or a small business.

At this stage, we have already looked at three of the main types of network components: router, hub and switch. Other devices can also be used on a network such as a Wireless Access Point (WAP) and a Firewall.

A router is needed to connect a LAN to a WAN (or to the Internet). A router scans data packets and redirects them towards the LAN or towards other routers depending on their origin and their destination.

A switch is a network component used to connect multiple devices together in a star topology. A switch would have a number of Ethernet ports (typically between 8 and 28 ports) to connect to other devices such as workstations and servers, WAPs, other hubs or switches or to a firewall or a router.

A switch is more efficient than a hub as it can redirect traffic towards the device it is aimed at. Switches can hence be used on larger networks where hubs would be inefficient. (e.g. school network, hospital network, etc).

A hub is a network component used to connect multiple devices together in a star topology. A hub would have a number of Ethernet ports (typically between 5 and 8 ports) to connect to other devices such as workstations and servers, WAPs, other hubs or switches or to a firewall or a router.

A hub is not as efficient as a switch and hence should only be used on a small network. (e.g. home network).

A Wireless Access Point (WAP) is a network component used to connect multiple devices together without using wires. A WAP could hence be described as being a wireless hub! It provides WiFi access to a network.

Most WAPs have a fairly small coverage area (10 to 30 meters) hence several WAPs may be required to cover a large building. 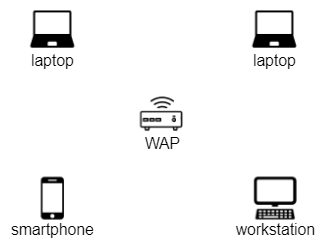 Devices equipped with a wireless Network Interface Card (NIC) can connect to a WAP.

Wireless data can easily be intercepted by potential hackers hence the need to encrypt wireless transmissions and to set a network key to restrict access to a wireless network (WiFi).

A firewall is a network component that usually “sits” just after the main router. It scans all incoming traffic to identify/block and report potential security threats coming from “outside” (e.g. the Internet) before they can reach the rest of the Local Area Network. A firewall is a necessary precaution to minimise the risk of hackers illegally accessing a network.

To connect a workstation to a LAN, the workstation needs to be equipped with a Network Interface Card (NIC). The NIC card will have a wired connection (e.g. Ethernet port) and/or a wireless connection to connect wirelessly to a WAP (Wireless Access Point).

The most widely used network cables are Ethernet Cables of different categories (Cat3, Cat5, Cat6, etc). These are fairly cheap, strong and can support a bandwidth of either 10 Mbps, 100 Mbps, 1000 Mbps (1 Gbps) or even 10Gbps.

Other types of cables that can be used on a network include coaxial cables (10 Mbps) and optic fibre cables (10 Gbps).

On a home network, a router is often an “all in one” device which includes a router, a hub or a switch, a Wireless Access Point (WAP) and a firewall, all in one box called router (or home hub).

A computer on a network is called a workstation. Two types of network can be setup.

In a peer-to-peer network, all computers are sharing files and other resources between each other without the use of a central server. This makes it easy to setup the network as there is no need to acquire and setup expensive servers. However, this can be difficult to manage as maintenance and computer upgrades (including security patches, virus protection) have to be performed on each single computer instead of being done centrally. This is the main reason why peer-to-peer networks are considered as less secure than client-server networks.

In a client-server network, end-users access the network by logging on a client computer/workstation. Other computers called servers (often with higher specifications) are also connected to the network and provide a dedicated and centralised service to all the workstations. There are different types of servers as described below. On a small network, a single server can have multiple purposes (e.g. web server and e-mail server or a proxy and a cache server)

On occasions, a company may need its employees to access its network remotely (e.g. for employees working from home or on a business trip). 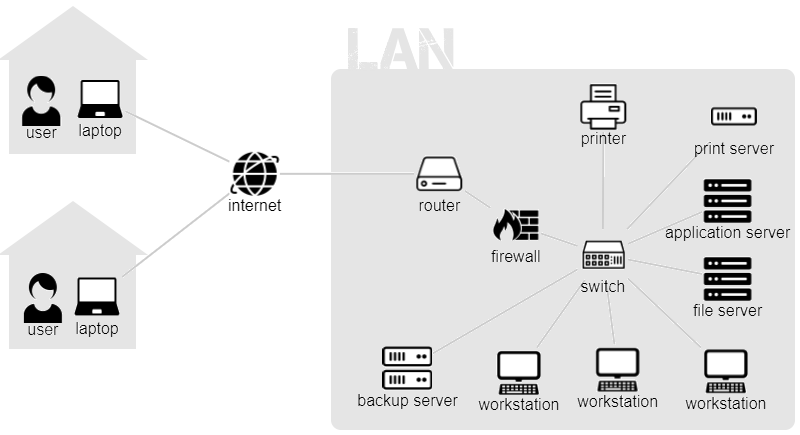 To enable remote access to its network via the Internet, which is a public network, the company has to set up and configure a VPN (Virtual Private Network). This will also mean that all the communications between the remote user and the company network will have to be encrypted and the remote users will have to authenticate (e.g. enter their username and password) to gain access to the VPN, so that only authorised users can do so.

Design Your Own Network

Use our network designer tool to create the layout of the network used in your school/organisation: 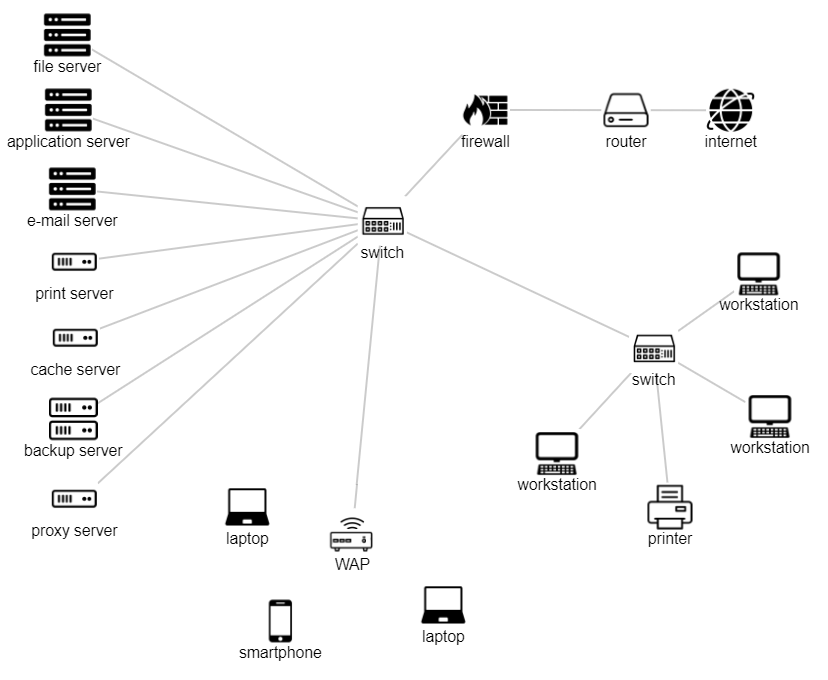 Design Your Own Network Online