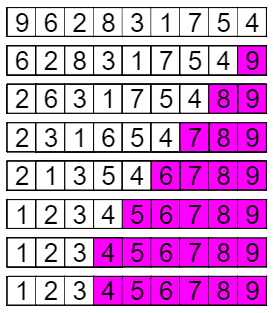 The Bubble sort algorithm is one of the key sorting algorithms used in Computer Science. It is a fairly simple algorithm to implement and is particularly useful when you need to find the top x values of a list.

This algorithm’s average and worst-case performance is O(n2), so it is rarely used to sort large, un-ordered data sets. Bubble sort can be used to sort a small number of items and is a lot more effective on data sets where the values are already nearly sorted.

The Python code belows let you visualise how a Bubble sort algorithm with a small set of values (from 1 to 9). The list of values is shuffled every time you run this code.