For this challenge you will design and write a program to play against the BBC micro:bit.

By completing this challenge you are going to use selection (IF statements) and comparison operators such as >= or <= to compare numbers. You will also use variables to store the value of random numbers, and to keep and increment a score as the game progresses.

Try to implement the game by yourself on the BBC micro:bit website:

If you are stuck you can always use our solution below:

Step 1: Initialising the game
For our game we will need three variables:

Step 2: Button A: Lower
When the user presses button A, they believe the next number will be lower than the current number. We can check if they are right or not.

If they are correct, we will display a smiley face, add 1 to their score and the nextNumber will become the current number whereas a new nextNumber is generated for the game to continue.

If they are wrong though, we will display a sad face as well as the value of the next number followed y the user score. 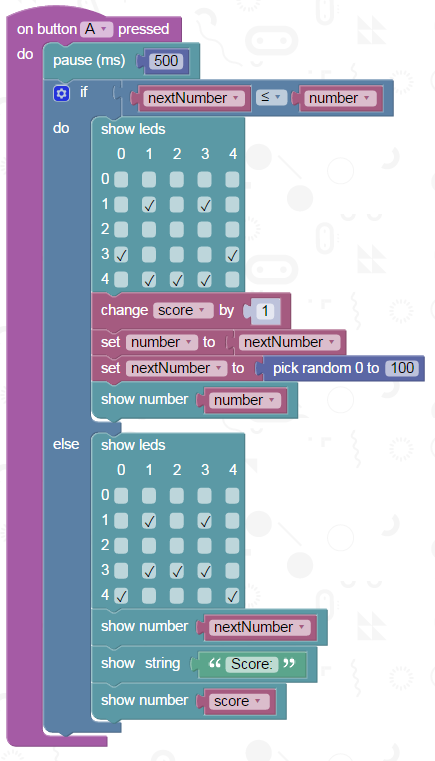 Step 3: Button B: Higher
Step 3 is very similar to step 2 but this time we are checking whether the next number is higher than the current number. 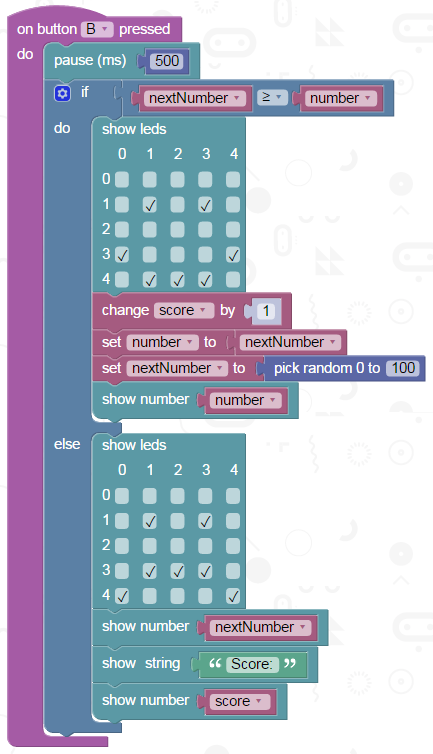 That’s it you have a fully working game. We can tweak it slightly though. For instance how could we code the micro:bit so that when the user presses both the A and B buttons at the same time, the game restarts from the beginning – a new set of numbers is generated and the score is reset to zero?