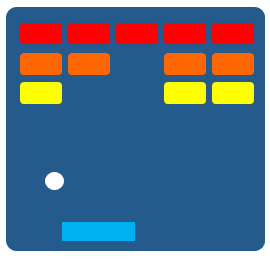 This tutorial is the first tutorial in a series of five Pygame tutorials:

Breakout is one of the earliest arcade video games, first released in 1976 by Atari. It was derived from the game Pong (released by Atari in 1972). This one-player game features simple 2D graphics. It consists of one paddle (in more recent version the paddle was replaced by a spaceship) used to return a bouncing ball back and forth across the screen. The aim of the game is to break the bricks of a brick wall by getting the ball to hit/bounce on the bricks. The score correspond to the number of bricks being hit.

In this tutorial we are going to recreate a game of Breakout using Python and the Pygame library. The Pygame library is the perfect library to build basic 2D arcade games and to start developing your OOP skills. (Object-Oriented Programming)

Your Python code will need to start with the following two lines of code:
Python

Step 2: Defining the colours you will use in your game

You will have to declare a constant for each of the main colours used within your game. To help you identify colour codes you may use a colour picker. We will also initialise two global variables, score and lives that we will use later on in the game.
Python

Your game will run in its own window, for which you can decide of a title, a width and a height.
Python

The main program loop is the key wrapper for your game.

The main program loop will also use a frame rate to decide how often should the program complete the loop (& refresh the screen) per second. To implement this we will use the clock object from the pygame library.

The main program loop will use a timer to decide how many times it will be executed per second.

Your background is ready? Let’s add the first sprite to your project by completing the next tutorial:
Breakout Tutorial using Pygame:Adding the Paddle