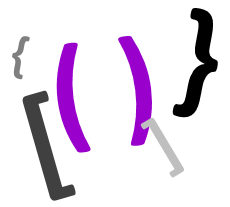 The aim of this Python Challenge is to write a script to validate an arithmetic expression by checking that it has a valid sequence of opening and closing brackets.

Let’s consider the following arithmetic expressions to decide whether they contain a valid or invalid combination of brackets:

Here is the implementation of this approach in Python:

More complex expressions may use different types of brackets such as square brackets [], curly brackets {} and parentheses (). We can adapt our script to validate an expression by making sure that when a closing bracket is found, the algorithm checks that it is of the same type as the last bracket that has been pushed into the stack.