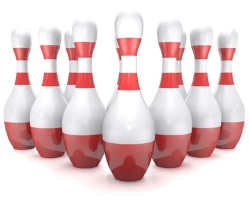 The aim of this challenge is to create a scoreboard for a game of ten-pin bowling. It will be used to automatically calculate the total score of a player as they progress through the ten rounds of the game.

In general, one point is scored for each pin that is knocked over. So if a player bowls over three pins with the first shot, then six with the second, the player would receive a total of nine points for that frame. If a player knocks down nine pins with the first shot, but misses with the second, the player would also score nine. When a player fails to knock down all ten pins after their second ball it is known as an open frame.

In the event that all ten pins are knocked over by a player in a single frame, bonuses are awarded.

A ten-pin bowling scoresheet showing how a strike is scored

A double’s pinfall is:

The total score from these throws is:

Three strikes bowled consecutively are known as a “turkey” or “triple”.

A turkey’s pinfall is:

The total score from these throws is:

Longer strings of strikes are called by various names, including “-Bagger” (Four Bagger), “Llama” (Four consecutive), and “-Pack” (Six Pack) depending on local use, equipment, and exposure to the sport. Recently, the event of bowling four consecutive strikes has also been called a “hambone”.Six strikes and nine strikes in a row can also be referred to “Wild Turkeys” and “Golden Turkeys” respectively. Any string of strikes starting in the first frame or ending “off the sheet” (where all of a bowler’s shots from a certain frame to the end of the game strike) are often referred to as the “front” or “back” strikes, respectively (e.g., the “front nine” for strikes in frames 1–9, or the “back six” for strikes in frames 7, 8, and 9 with a turkey in the tenth). A “perfect game” or 12 strikes in a row is also rarely referred to as the “Thanksgiving Turkey”. A “Clean Game” is a game with strikes or spares in every frame (not counting bonus balls).

A small number of bowling fans have recognized that naming each strike in a consistent manner adds to the enjoyment and excitement of the game. Based on this, a growing number of bowlers subscribe to the “Duck, Duck, Turkey” method of titling consecutive strikes. In keeping with the tradition that the third consecutive strike is called a “Turkey,” every third strike references turkeys and all strikes under this method have been named after birds as follows: Strike 1 – Duck; Strike 2 – Duck; Strike 3 – Turkey; Strike 4 – Goose; Strike 5 – Chicken; Strike 6 – Turducken; Strike 7 – Penguin; Strike 8 – Flamingo; Strike 9 – Turkey Vulture; Strike 10 – Woodpecker; Strike 11 – Eagle; Strike 12 – Turkey Hawk.

A player who scores multiple strikes in succession would score like so:

The most points that can be scored in a single frame is 30 points (10 for the original strike, plus strikes in the two subsequent frames).

A player who bowls a strike in the tenth (final) frame is awarded two extra balls so as to allow the awarding of bonus points. If both these balls also result in strikes, a total of 30 points (10 + 10 + 10) is awarded for the frame. Some people call it “striking out”, since three strikes in baseball equals an out.

A ten-pin bowling scoresheet showing how a spare is scored

A player who bowls a spare in the tenth (final) frame is awarded one extra ball to allow for the bonus points.